It is not too hard to reach the waterfall, it is located in Kemenuh Village, Sukawati District, Gianyar Regency. It is only about 4 km from Sukawati Market, it takes around 45 minutes from Sanur and 1, 5 hours from Kuta. Since it is located not too far from Sukawati art market, so you can make your trip to visit the market first then continue to the waterfall to chill and relax.  Like other waterfalls in Bali, you also need to go downstairs to see the view of Tegenungan Waterfall from the parking lot.

On your way down, you will also find a temple with a fountain, from this temple you still need to go down for around 75 meters before seeing the waterfall. The current of the river is not too strong and still safe to swim. You will also find that there is a cliff that is shorter than the other cliffs. If you are brave enough you can go up to the cliff and take photos closely to the waterfall from this cliff.

Tegenungan waterfall can be said newly famous because if social media, but actually, it has been developed since many years ago. So talking about the facilities, it already has enough facilities to support tourism. The parking lot is big enough, you will find gazebos to take a rest and some warungs to buy drinks or snacks. So, if you are planning to go to the Sukawati market, or you just want some new things to do, just go to Tegenungan Waterfall for different experiences. 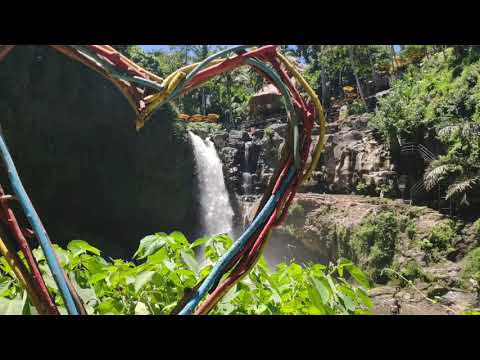 Related to this Bali Destination

Gitgit waterfall is about 35 m high and known as the highest waterfall in Bali. It also has a pretty big volume of water, and never become dry even on the dry season.
Read more

Sekumpul Waterfall the Power of Hidden Beauty in North Bali

The waterfall here comes from a mountain spring above the village and the river from Sekumpul village. The waterfall is so fresh and clear.
Read more

Munduk Waterfall for the natural view of water tourism in Bali

For you the nature lovers, let’s enjoy the natural view of a natural waterfall and fresh air that will be offered at Munduk Waterfall.
Read more

The journey to the Tibumana spot through the trail will really feel very pleasant. Around the road, there are a lot of ferns and mosses.
Read more

Tegalalang is located in the northern Gianyar Regency, around 20 minutes from the center of Ubud or around 45 until 1 hour from Denpasar
Read more
+62 813-3980-2784